When the American Blues Folk Festival entourage arrived in Germany on 3rd October, 1962, German jazz scholar Joachim Ernst Berendt’s idea of bringing a cross section of American blues musicians to Europe for a package tour had finally come true. On one of his extensive jazz research trips of the United States in 1960, Berendt was literally blown away by the many authentic blues artists he had encountered, especially on Chicago’s South Side. American jazz had become very popular in Europe, and rock and roll was just gaining a foothold, and since both genres drew influences directly back to the blues, Berendt thought that European audiences would literally flock to concert halls to see these blues artists in person.

Once back in Germany he broke the idea to promoter Horst Lippmann of the German Jazz Federation, who was all for it. By this time Lippmann had years of experience producing concert tours, yet it took him and his partner, Fritz Rau, two years to put it together. Dubbed “The American Folk Blues Festival,” the performers that first year included John Lee Hooker, pianist Memphis Slim, bass player Willie Dixon, guitarist T- Bone Walker, duo Sonny Terry & Brownie McGhee, drummer Armand “Jump” Jackson, harmonica player Shakey Jake Harris (nephew of Magic Sam), and singer Helen Humes, who had joined Count Basie in the late 1930s. Most of these had never previously performed outside the US and the tour attracted substantial media coverage wherever they played and Lippmann & Rau arranged for their artists to appear on a series of television specials recorded for German television. 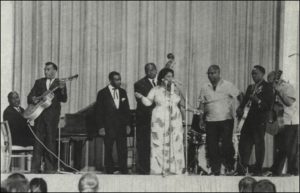 The first AFBF tour visited Germany, Switzerland, Austria, France and the United Kingdom, performing at prestigious venues such as the Olympia in Paris, the Titania Palast in Berlin and the Konzerthaus in Vienna. Usually two shows were performed on each night, an afternoon show and an evening show. Although officially dubbed the American Folk Blues Festival, the shows in Paris were billed as “Festival de Rock And Roll et de Rhythm and Blues”, while the shows at the Manchester Free Trade Hall were dubbed “Jazz Unlimited/Rhythm & Blues U.S.A”. 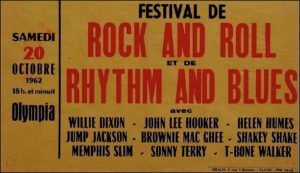 For the German concerts, graphic duo Hans Michel and Günther Kieser were asked to come up with an advertising poster. Two different designs were eventually printed, one in pink in landscape format, and another in b/w in portrait format.

The tour was a major success and played a vital role in exposing American roots music to a new and appreciative audience abroad, especially in the United Kingdom, where the concerts proved to be a significant eye-opener for the founding members of the British blues-rock boom. Attendees at Manchester on Sunday, 21st October, the first ever venue for the festival in Britain, included Mick Jagger, Keith Richards, Brian Jones and Jimmy Page.

The program for the Manchester concert together with ticket stub for the evening concert is available at Weary Tune. We also have an original poster signed by artist Günther Kieser and the entire entourage except Jump Jackson. T-Bone Walker also dated it 10-6-62, which is the date for the concert at the Kongreßhalle in Frankfurt – the first AFBF concert on German soil.