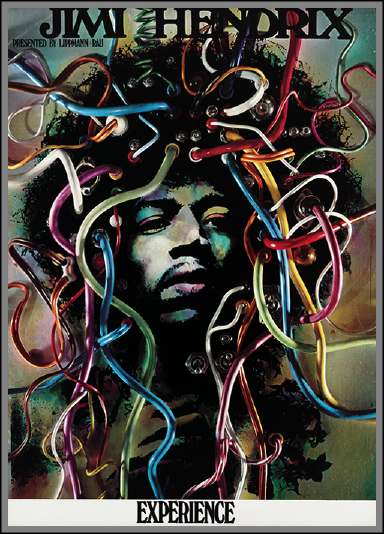 As something new,  I maintain that Kieser may have designed the poster, or at least fostered the idea for the poster, as early as late 1967. In his autobiography 50 Jahre Backstage, promoter Fritz Rau says he wanted to bring Hendrix to Germany ever since witnessing him perform at the Olympia in Paris in October 1966 as a support act to Johnny Hallyday. 1967 was out of the question since the Jimi Hendrix Experience had already been booked to appear at the Star Club in Hamburg during March 1967 and then again in May visiting Berlin (15th), Munich (16th), Frankfurt (17th), Offenbach (18th), Kiel (27th), and Herford (28th). Instead a nationwide German tour produced by Lippmann+Rau was planned for January 1968. In late 1967 the following dates were advertised by Lippmann+Rau: Musikhalle, Hamburg (15th), Stadthalle, Bremen (16th), Deutsches Museum, Munich (17th), Sportpalast, Berlin (20th), Jahrhunderthalle, Frankfurt (21st). The tour was billed as “A Concert In Psychedelic Music”.

It’s quite conceivable that Kieser must have started work on an advertising poster by the time these tour dates were publicly announced. It also fits in very well with the fact that the “Wired Hair” poster was created using an official b/w photograph of Jimi by Donald Silverstein. Silverstein’s only photo session with Hendrix was in 1967. Kieser has later explained: “The expression of this portrait (the photo) with the strong hair around his face was like a human signal. I enlarged the volume of his hair in a collage for my visual idea to bring in colorful electric strings. I found this idea in a second, as if it came with the sound of his music. I was sure this would be understandable for the audience and a visual translation or interpretation for Jimi Hendrix and his music.” 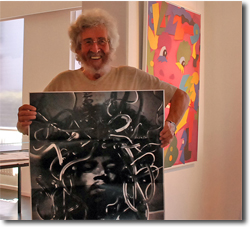 Why the January 1968 tour was canceled, I don’t know. Hendrix did play in both Sweden and Denmark in early January so it’s not that he wasn’t in the region. And his US tour didn’t start until February. If any of you can shed some light on this, I would love to hear from you.

Back to the poster itself. There are plenty of different versions, but only few are worth collecting.

First and foremost there is the original concert poster, printed before the shows as an advertising poster, with the primary purpose of selling tickets. These were printed in two different sizes, which was quite common in Germany at the time: A1 (594 x 841 mm) and the large A0 (841 x 1189 mm). These posters are widely sought after by collectors and are now selling for well over $10,000.

Then there is the official poster-program, which was sold as a souvenir at the January 1969 German concerts. It was a folded poster in A0 format printed on both sides. The front of the poster-program is identical to the concert poster but without the date and venue imprint.

The original Darien House poster, also known as the Stuttgart poster, also deserves a mention. It was sold as a souvenir at the April-May 1969 US concerts. The story is that Kieser’s image turned out to be so popular with the public that it was decided to have the poster reproduced but with an imaginary date and venue as not to confuse it with the original concert posters (the same thing was done with Kieser’s Fleetwood Mac poster the following year). The poster was distributed by Jack Rennert’s Darien House in New York and subsequently sold at the Spring 1969 US shows. Rennart was a huge fan of Kieser’s art and had distributed his posters in America years before the Hendrix poster. Again there are two different sizes of the Stuttgart poster, but for an entirely different reason. The first printing was in the large A0 format and it was printed on the same uncoated paper stock as the concert poster and the poster program. Most of these were destroyed in a warehouse fire and only very few copies survived. The Darien House poster which was sold at the Spring 1969 US tour is slightly smaller and is printed on light coated paper stock. The fact it measures approximately 25″ by 35″ inches indicates it was probably printed in the US regardless of the fact it says “Printed in West Germany”.

As for all the other numerous versions of Kieser’s poster, well, avoid them. They are not really worth collecting.